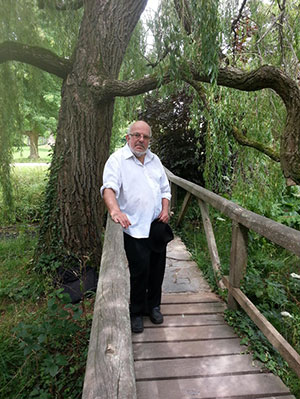 I was brought up in Essex and spent my youth cycling, swimming, writing poetry, and playing the violin. I loved astronomy, reading, hanging about in coffee bars, literature, science, and science fiction. Coming from a musical family, I drifted into music as a career. After studying at Royal Academy of Music, I joined various orchestras, including the Halle in Manchester and the Scottish National in Glasgow. I continued writing and had poems published in magazines and anthologies, including a Corgi anthology, ‘It’s the World That Makes the Love Go Round.’

Feeling the need to revisit a youth that I felt should have been more misspent, I joined a band called String Driven Thing and, later, another called Van Der Graff Generator. During that time I shared a stage with many of the greats, including Genesis, Thin Lizzy, Lou Reed and many more examples of waywardness and recreational dissent.

Escaping the angst ridden, hyper-manic life of touring with bands, I joined the Iceland Symphony and spent six years absorbing a daunting landscape of ice and fire. More recently I have worked in Bristol teaching music to children and teenagers who have taught me the art of getting by, lying with facility, and being vaguely interested without actually showing it. I am divorced on friendly terms, have a son and daughter, six verbally restrained grand children, a lively and persuasive step-granddaughter, and have access to an assortment of totally wayward family pets.

I now live in Bristol and devote my time to writing novels. My Worlds At Risk series is well under way, and I have more in the pipeline.

My novels are full of action, intrigue, humour, hi-tech, with a touch of dark fantasy and a visionary dimension.